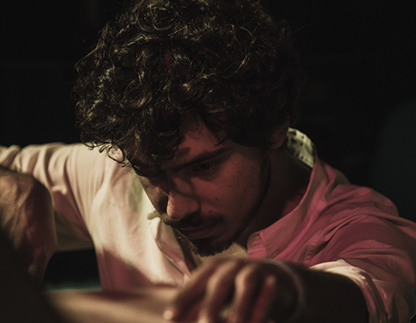 Luis Fernando Amaya is a PhD candidate in Composition and Music Technology program in the Bienen School of Music. His dissertation project, Árbol de Bocas ("Tree of Mouths"), is an opera in which the only character is a fantastic tree that inhabits the middle grounds between the animal and the vegetal realms: a tree that grows mouths instead of leaves. Árbol de Bocas uses imagination and sound as political tools in order to build a cognitive bridge between humans and a vital non-human 'other' whose subjectivity and rights have been ignored by most societies in the Western world. Luis Fernando was recently named a Presidential Fellow, the most prestigious fellowship awarded to graduate students by Northwestern University. If you would like to learn more about his work, visit www.luisfernandoamaya.com.

How would you describe your research and/or work to a non-academic audience?
My dissertation project is a piece that aims to challenge the very idea of "personhood" and to whom it is granted in many societies. Scored for twenty-four voices, saxophone quartet, percussion, multi-channel electronics, and two soloists, Árbol de Bocas (“Tree of Mouths”) is a one-hour-long opera that depicts a year in the life of its only character: a tree.

This tree, however, is not a common one; it belongs to an imaginary species located halfway between the vegetal and the animal kingdoms. In short, this tree grows "mouths" instead of leaves. This dissertation project engages with a simple, but potentially powerful question: How would humans relate to plants if the latter could emit sounds that expressed physical and emotional states? This question raises strong political and ethical implications as the survival of humans—as well as that of every other animal and fungus—depends completely on vegetal life at various levels.

Tell us what inspired your research and/or work.
In many Indigenous philosophies across the American continent, the idea of considering (other) animals or plants as beings­—who are not beneath or disconnected from the homo-sapiens but, actually, entities or "non-human people" from which we have a lot to learn—is very common. This idea of "non-human" personhood has drastically changed the way I conceive and relate to others. This perspective and its environmental implications have been extremely influential in my work and in my daily life.

Whom do you admire in your field and otherwise, and why?
Although what I do is mainly experimental music (both notated and improvised), I really admire musicians from traditional genres from all across the world. I especially admire those who have fought to keep their music alive despite a general lack of interest from younger generations, such as the Cardencheros de Sapioriz (Durango, México), or those who, a few decades ago, managed to give Son Jarocho a reemergence when it was close to disappearing.

What is the biggest potential impact or implication of your work?
Because I've been very interested in how can I challenge and expand the way in which I view and relate to other beings both personally and through music, I try to push myself to imagine different possibilities with regards to issues that I deeply care about and explore them through sound. As abstract as a statement this might be—especially for the listeners with limited access to the thought process behind the music they are listening to—this approach to composing and improvising has allowed me to experiment with ideas such as 1) confronting two clashing conceptions of historical events through music, 2) attempting to compose *with* an imaginary animal, and 3) imagining how would I relate differently to plants if I could hear them. Because of the difficulty to convey concrete ideas through music (especially without lyrics or spoken words), it may seem that this approach may only change my personal thinking. Nevertheless, the fact that music is such a social discipline has allowed me to share these ideas, explore different paths with collaborators through conversations and written dialogue, and bring the work and its ideas to a political dimension.

What books are on your bedside table?
I'm currently reading two different types of books at the same time: 1) those related to my dissertation and 2) those that allow me to distract myself from the first type of books. I have Los Hombres Verdaderos: Voces y Testimonios Tojolabales ("The Truthful Men: Tojolabal Voices and Testimonies") by Carlos Lenkersdorf, David Abram's Becoming Animal: An Earthly Cosmology, Cuentos Para Fomentar el Turismo ("Short Stories to Promote Tourism") by Emilio S. Belaval, Indian from the Inside: Native American Philosophy and Cultural Renewal by Dennis McPherson and Douglas Rabb, and Palinuro de México by Fernando del Paso.

How would your closest friends describe you?
Since I wouldn't want to put words in their mouths, I asked some of my closest friends this same question. One of my favorite answers was: "Luis Fernando is the type of guy who would make an opera in which the only character is a tree." That's not only true but also accurate. Another answer was: "Luis Fernando is someone who can be super serious and intense at one moment and in the other can be laughing and making fun of himself (and you.)"

What did you originally want to be when you grew up?
The first thing I remember is wanting to be a cartoonist. I was about 4 or 5. My parents had a book about different types of cartoons—from the beginning of the 20th century to the '90s—and I loved it. Then, I was obsessed with everything related to ancient Egypt and wanted to be an Egyptologist. The next profession I wanted to be was closer to what I do now: a pianist and orchestra conductor. It wasn't until I was 16 that I realized that I wanted to compose.