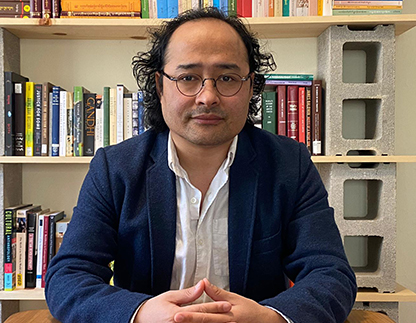 Dhondup Tashi Rekjong is a PhD student in Religious Studies in the Weinberg College of Arts and Sciences. His research focuses on both religious and secular auto/biographical literature of modern Tibet.

I have been examining the diversity of Tibetan life-writing literature to gain a better understanding of Tibetan history. Through this literature, I scrutinize the language of historical silence, collective trauma, religious tolerance, historical consciousness, national identity, and cultural resistance at large. Furthermore, I place the Tibetan language at the center of my research to elicit the subtlety and nuance of the Tibetan life-writing literature produced in the context of unequal power relations under China.

I was born in Tibet, an occupied territory of the People’s Republic of China, situated on the roof of the world. I've lived in India, Norway, the USA, and Canada. I'm inspired by Tibetans who have worked tirelessly in Tibet under China to establish creative spaces for writing and other acts of cultural preservation. They are the custodians of Tibetan culture. Additionally, Tibetans such as His Holiness the Dalai Lama, who have been keeping Tibet as a political issue alive outside Tibet, are always an inspiration to continue my studies.

Despite my strong interest in history, religion, culture, and language, I chose to study economics as an undergraduate. Though I wouldn’t call it a mistake, that decision taught me that it is so crucial to follow your own passions and interests without being distracted by social and family expectations.

I find it rewarding to take courses in other departments. This broadens my disciplinary approaches to my own research. Working with various language sources is sometimes challenging because I don’t necessarily find common ground for conversation at times. In my case, Tibetan, English, and Chinese are at the minimum the three different languages that I work with.

When I applied to PhD programs, I was accepted to three prestigious universities: Oxford, Northwestern, and the University of British Columbia. I chose Northwestern over the other two because of my excellent supervisor, Professor Sarah Jacoby, and because of the interdisciplinary approach and strength of religious studies here.

Lots of New Yorker magazines. I also keep either Russian or Japanese novels because I can relate to them.

I wanted to be a bird-chaser when I was young. In my village in Tibet, every young kid loves to chase birds. Other than chasing birds, I wanted to be a writer, and I never gave up on that dream.

If you’re someone interested in pursuing Tibetan Studies, study the Tibetan language seriously and thoroughly. Having a strong language foundation is vital to transcend the cultural barriers and to gain full access to Tibetan culture, Tibetan history, and the Tibetan people. I think this rings true for other area studies as well. It would be fitting to quote Tibetan scholar Lama Jabb’s words here: “Language is not just a mere mode of communication. It does not only convey thoughts, feelings, and information but also affects the ability to think, feel and communicate in profound ways at both individual and social levels.”