PhD Candidate in the Screen Cultures program, Department of Radio, TV, and Film 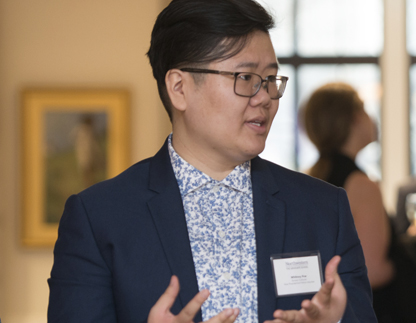 Whitney Pow is a PhD candidate in the Screen Cultures program in the Department of Radio, TV, and Film. Their dissertation reframes histories of software and technology by focusing on the contributions of queer and transgender computer scientists, coders, and game designers. Whitney was recently named a Presidential Fellow, the most prestigious fellowship awarded to graduate students by Northwestern University.

How would you describe your research and/or work to a non-academic audience?
I write about video games, software, and hardware from the 1970’s to today, including video art and glitch art, video game consoles like the Commodore 64 and the Bally Astrocade, and contemporary queer digital art and video games, focusing on the contributions queer and trans people have made to the history of software and technology. Many histories of video games and software are centered on the military-industrial complex and logics of war and domination. In my work, I re-contextualize the history of video games and computers as stemming from the many queer and trans people, especially trans women, who have made such a foundational impact on the history of software and computing. I locate queer and trans people as always already a part of the history of technology, with contributions that deeply affect the way we understand and interact with computers and software today. I examine games made in the contemporary queer games movement, tracing these games’ political use of failure and impossibility to critique and comment on the legal, medical, and social struggle for queer and trans human rights. I connect these contemporary games and game designers with foundational trans game designers and programmers from the past, including Danielle Bunten Berry and Jamie Faye Fenton, and the contributions they made in the history of networked games, the home video game console and the rise of computers in the home, and glitch art.

Tell us what inspired your research and/or work.
I am trained as a film scholar, and my research was originally focused on experimental and avant-garde film and video made by queer people, trans people, and people of color. I’ve always been deeply invested in the intersections of gender, sexuality, and race throughout media, and I’ve always loved video games. It was a wonderful moment when I realized that video games were meaningful objects that we could write about and study—I owe this in part to Professor Sheila Murphy at the University of Michigan and her encouragement of my interest in video games in her class, “Virtuality and Digital Identity”. It was a moment of recognition, too, when I began to play queer video games and see the ways in which queer and trans life directly intersect with video games and the histories and stories we tell through them.

Whom do you admire in your field and otherwise, and why?
My field is called Queer Game Studies. It is an emerging field that sees issues of gender, sexuality, race, and identity as deeply embedded in the study of games and software. What I love the most about my field is that there are so many wonderful queer, trans, and non-binary scholars and game designers who have been role models, mentors, colleagues, and friends to me. It’s a wonderful community of people whom I deeply respect and admire, including Bonnie (Bo) Ruberg, Adrienne Shaw, Amanda Philips, TreaAndrea M. Russworm, Jennifer Malkowski, Teddy Pozo, micha cárdenas, Mattie Brice, and others. Thank you for everything you’ve done to make queer game studies what it is today.

What advice would you give your younger self or someone considering a similar path?
Take your time before applying to graduate school! I think time is important to figuring out your research interests and research plans, especially for people in the humanities. The time I took between college and graduate school helped me figure out what was important to me, and what interventions I wanted to make in my own research. During this time, I did freelance graphic design and journalism work that helped me figure out that video games were important to me and why they were important.