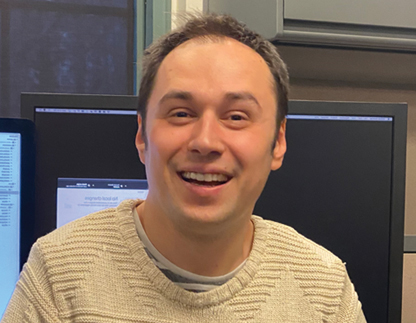 Thomas Stoeger is a postdoctoral trainee in the Amaral Lab at Northwestern University. His research impacts molecular diagnostics, the understanding of human gene regulation, and science policies. Thomas was a Data Science Scholar from 2016-2018 with appointments in the Center for Genetic Medicine and the Northwestern Institute on Complex Systems (NICO).

Historically acquired biases have left hundreds of disease-associated genes uncharacterized. I use large data-scientific approaches to understand the cultural, biological, and chemical origins of these biases—and how to avoid them. I also try to build upon these insights to study overlooked genes contributing to aging.

I had to stop my PhD studies after one year because I became allergic to my lab’s main model animals, fruit flies. Fortunately, I found a new lab that allowed me to discover my passion for computational approaches to bypass human limitations.

During my PhD studies, budget constraints prevented me from running an experiment on all 20,000 human protein-coding genes. To appeal to a broad readership, I deliberately settled on 1,000 already disproportionally studied genes that together accounted for more than half of the existing literature on genes. I keep wondering what most of the 19,000 other genes—many of which remain largely uncharacterized—are doing in each of our cells.

I admire Francis Collins and his colleagues for realizing the Human Genome Project as well as the economist Amartya Sen for his clarity and work on justice.

I would say the vastly different cultures of the fields of my research: biology, data science, and studies into scholarship.

I hope that my work will enable others to drive their research toward understudied research problems in a calculatable and defendable way, particularly on uncharacterized disease-associated genes.

One of my mentors advised me that Chicago is the capital for data-scientific studies into the workings of science. I also deeply value the openness and curiosity of Northwestern’s many biologists and medical researchers.

By keeping work-related electronic equipment out of my sight. If I don’t do something social, I spend half an hour on a conscious transition into recreational time: an outdoor activity during the summer or video games during the winter. Most days, I try to return to work toward the end of the day for tasks that do not need me to be alert, like crafting figures.

The poetry books semiautomatic by Evie Shockley and Like by Alicia Stallings, the non-fiction books Novelty by Michael North and Biocapital by Kaushik Rajan, and the graphic novel Rusty Brown by Chris Ware.

I wanted to become the first paleontologist to discover living dinosaurs so that I could play with them.

An early mentor told me not to work on research projects that appear certain to succeed. These projects are boring and will anyways be done by someone, and thus they are not worth your time.

As an undergraduate, I failed several of my initial classes and barely passed the others despite my enthusiasm. I had to learn to ask my fellow students for help and, from them, I realized how I needed to change.

I am thankful for having witnessed repeatedly how scientific and non-scientific endeavors of mine have been continued by amazing like-minded people.