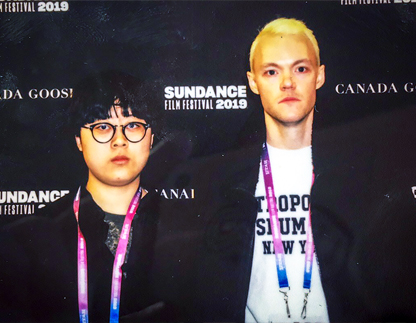 Shuhan Fan and Luther Clement-Lam are recent graduates from the School of Communication with masters of fine arts in documentary media. Their first documentary film made since graduating, Stay Close, premiered at this year’s Sundance Film Festival in January and will be broadcast in the POV (Point of View) series on PBS in the Fall of 2019. Stay Close immerses animation and archival footage, chronicling the underdog story of a fencer from Brooklyn who overcomes a gauntlet of hardships on the road to the Olympics. The film was the recipient of the 2016 Tribeca Film Institute/ESPN Future Filmmaker Prize.

How would you describe your research and/or work to a non-academic audience?
We began collaborating as MFA students at Northwestern. Merging Luther’s dynamic, associative visual style with Shuhan’s surrealist film logic and talent for story structure, we work in both fiction and nonfiction, live action, and animation.

What have been some of the most memorable twists and turns of your career?
Well, everything feels somewhat different after Sundance, for sure. Just before we were selected, we were ready to completely reconfigure the film. Just an hour before starting that re-edit, we got the call from a lovely programmer who we thought was a prank call at first.

Tell us what inspired your research and/or work.
Beautiful, determined, actual people around us inspire turning small, intimate stories into cinema worthy of being projected in a theater. Watching the emotional reaction of someone who is seeing their departed parents’ home movies projected in a dark theater is worth any struggle.

What is a mistake you have learned from in your career?
We have learned to trust our excitement. If a character, subject, or setting excites us, then we should follow that instinct, regardless of whether it seems “pitchable.” This doesn’t answer the question explicitly but it does implicitly.

Whom do you admire in your field and otherwise, and why?
We love Alice Rohrwacher. Happy as Lazzaro is the blend of fantasy and social realism that we strive for in both fiction and nonfiction.

What do you find both rewarding and challenging about your research and/or work?
The transcendent experience of a real person watching themselves and their life become cinema is the strongest drug imaginable. The challenge is getting funding for films outside of the narrow scope of what already exists.

What is the biggest potential impact or implication of your work?
Hopefully we help the audience have an emotional journey. If we can accompany that with subtler aspects, such as allowing them to empathize with someone whose identity and experience is completely different then all the better.

Why Northwestern?
We both came to school at Northwestern for mentors and collaborators. We are elated to say that the goal was achieved.

How do you unwind after a long day?
Dancing like grandparents. Singing about the frustrations of the day to the tune of existing pop songs. Steamed dumplings.

How would your closest friends describe you?
Shuhan described by Luther: She’s a brilliant space cadet that I’m so glad and so surprised has managed to survive to this point.

Luther described by Shuhan: Luther helped me redefine the meaning of “brave adult.” To be a brave adult is not to become another adult and do things in their way. It is about no matter how old you are and what happens, you can still manage to stay a child.

What did you originally want to be when you grew up?
Luther: I spent my life as an athlete, attended college with an athletic scholarship, and then was thinking to shift into medical school for orthopedic surgery when I was asked to edit some music documentary shorts. End of story for me.

Shuhan: I wanted to be either a filmmaker or an astronomer. The choice became much clearer after I failed my math and physics test three times in a row.

What advice would you give your younger self or someone considering a similar path?
No idea is so precious that it cannot be improved. Enjoy the process of creating with other people. Enjoy their contributions and integrate yours with them.