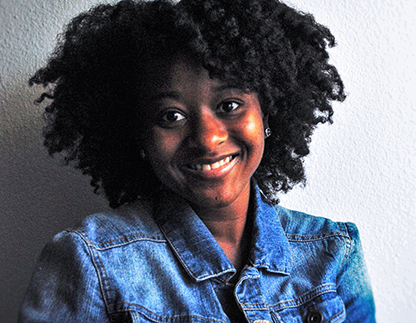 Raven Morris is a PhD candidate in the Screen Cultures program in the Department of Radio/Television/Film at Northwestern’s School of Communication. Her research explores culturally-specific concepts of African-American memory and storytelling as exemplified in historical and contemporary works of documentary and fictional love stories, family histories, and stories of migration. She hopes to locate spaces in modern cultural storytelling where dominant ideologies are challenged by alternative narratives. Last summer, Raven interned with the Shorefront Legacy Center, a nonprofit historical organization that maintains an archive about black communities in the Chicago suburban North Shore.

How would you describe your research and/or work to a non-academic audience?
Shorefront Legacy Center’s mission is to collect, preserve, and educate the public on the black history of Chicago’s suburban North Shore. The history I was able to help preserve last summer is one centered around integration in Evanston during the late 1960s and the inherent connection between life, work, and civic duty among black leaders in the community at the time. I had the privilege of processing the collection of Joseph E. Hill, the first black superintendent of schools in Evanston’s School District 65 and the first black principal of Foster Elementary School at the time of integration in Evanston. Foster Elementary School was also Hill’s alma mater.

What have been some of the most memorable twists and turns of your career?
As a PhD student in the Department of Radio/Television/Film, I found Hill’s personal VHS copy of a 1960s student documentary on the integration process fascinating. That VHS immediately caught my attention and redirected the outcome of my work and research. Lawrence Brook, a young black filmmaker from Evanston who went on to work for every major television network in Chicago, documented the integration of his former elementary school in 1967. His earliest film is a capsule of the history of education and communal relations in Chicago’s North Shore, telling a national story through a communal lens. It is an important historical document not only because of its content but also because of its creation, as it belongs to a tradition of critical black student filmmaking from the era.

Tell us what inspired your research and/or work.
During my first year of Northwestern’s Screen Cultures PhD program, my interest around black storytellers across media was solidified. The Center for Civic Engagement’s inaugural Chicago Humanities Initiative program gave me the opportunity to build upon that interest as an intern for a local organization. In picking a practicum spot for my internship, my goal was to serve an organization that aligned with my intentions around legitimizing black stories and the authors who create and preserve them. Shorefront Legacy Center revealed itself to be such a place.

Whom do you admire in your field and otherwise, and why?
I admire folks like Dino Robinson, who operate spaces like Shorefront for their work in preserving, educating, and legitimizing the histories of their communities. They have intimate knowledge, connections, and relationships with those represented by the archives. If someone is interested in a collection of artifacts housed in such a space as Shorefront, they don’t have access to just ephemera. They have access to real people who run the space and make these histories operational. They are weavers of the webs of community that these histories seek to maintain.

What is the biggest potential impact or implication of your work?
Keeping black history and black knowledge in the community from which it’s produced, managed, and taught by those intimately connected to it adds a powerful dimension to the utility of the archives that wouldn’t be available if these things were housed elsewhere. That combination of archival content and communal relation allows for the articulation of new kinds of knowledge and educational possibility. It brings a personal nuance to the education of marginalized histories. Supporting such organizations creates new kinds of encounters, not only for historians and researchers like myself but for community members and local descendants. These encounters can have an incredible and positive impact on those who choose to engage.

What advice would you give your younger self or someone considering a similar path?
For academics interested in working with local organizations that preserve their own histories, it’s important to practice humility and to position one's self as a supportive actor within these spaces. Coming in with an attitude oriented toward service allows for deeper connections to be made between yourself and the communities you're looking to support. In this way, you'll be able to learn more about how these spaces operate, what exactly they can gain from your academic expertise, and what exactly you can gain from their wealth of knowledge. So, my advice: listen longer than you speak.