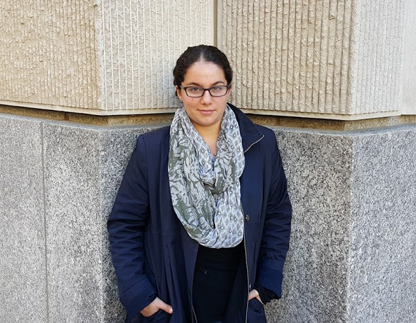 Negar Razavi is a postdoctoral fellow at Northwestern University’s Alice Kaplan Institute for the Humanities. She specializes in political anthropology and her work focuses on national security, expertise, gender, race, humanitarianism, and U.S. foreign policy in the Middle East. Drawing on over two years of ethnographic research in Washington, D.C., Negar’s research specifically examines the role of policy experts and think tanks in shaping U.S. security policies towards Iran and Egypt.

Negar has published her research in the Political and Legal Anthropology Review, Critical Studies on Security and Signs: Journal of Women in Culture and Society, as well as more publicly oriented media such as GenderAvenger, Jadaliyya, the Message, and The Middle East Report. Prior to joining the Kaplan Institute, Negar was a visiting assistant professor of anthropology at William & Mary.

How would you describe your research and/or work to a non-academic audience?
I am a political anthropologist interested in how experts shape U.S. security policies toward the Middle East. Since 9/11, a growing number of analysts have emerged from within the Washington policy community, who claim broad political, social, economic, and security expertise on this complex and diverse region. I use the people-centered tools of ethnography to understand how and why these analysts have become so influential at the expense of other regional experts, while examining their collective effect on U.S. policies.

What have been some of the most memorable twists and turns of your career?
I started out wanting to be one of these analysts as soon as I got my bachelor's degree. As someone who was born in the region, I thought that policy change could come from working for an elite foreign policy think tank in the U.S. I learned firsthand, however, that critical voices, particularly those from the region, are often excluded in these spaces. Five years after leaving the policy world, I returned to study it as an anthropologist.

Tell us what inspired your research and/or work.
I was born in Iran and raised in the U.S. I was a high school senior when 9/11 happened. My first year of college, the U.S. invaded Iraq. Since then, I have watched as the U.S. continues to expand its power across this region through military force, economic sanctions, surveillance technologies, diplomatic pressure, and more—all in the name of supposedly protecting its own citizens from people and societies in a region most Americans do not know or care to know. Through my work, I set out to better evaluate how ideas and knowledge inform U.S. policy decisions. For instance, when the U.S. says sanctions against Iran will change the Iranian government's behavior, what is that argument based on? What information did they use to justify this long-standing policy? Who is advising U.S. policymakers? And why?

What is a mistake you have learned from in your career?
I learned that for your own wellbeing and sense of fulfillment, it matters more who you work with rather than what your title is or where you work. Before I came back to academia, I had to learn this lesson the hard way.

Whom do you admire in your field and otherwise, and why?
I admire senior women scholars in my field, particularly women of color, who have not only opened doors for other younger scholars but who also try to make their work relevant to communities far beyond the academy.

What do you find both rewarding and challenging about your research and/or work?
Because I deal with issues of U.S. foreign policy and national security as a woman and as someone from the Middle East, my analysis is always suspect—not just from my policy interlocutors in D.C. but also from other academics who work in these spaces. At the same time, being an outsider offers me unique opportunities to ask the uncomfortable, sometimes obvious questions others are not willing or able to ask of those in power.

What is the biggest potential impact or implication of your work?
I hope my work helps further empower coalitions of people both inside and outside of Washington who are trying to push back against the prevailing, problematic logics that have driven U.S. policies toward the Middle East (and beyond), but who are often made to feel as though they are foolish, naive, or worse. My work demonstrates that U.S. policies are the result of systems of reward and risk and cultures of power that ensure the status quo is falsely seen as inevitable.

Why Northwestern?
I was very excited to work with the Kaplan team, given the reputation of the Institute. I was eager to learn more from its director, Professor Jessica Winegar, whose work has greatly inspired my own. Tom Burke has also been an amazing colleague and guide, who has demonstrated the importance of public humanities scholarship within universities.

How do you unwind after a long day?
I like playing with my two kids, who are both inquisitive, hilarious, and fun. Otherwise, I'm a huge anime and fantasy nerd. I’ve recently started watching old shows with my daughter, who is as into this nerdy stuff as I am.

What inspires you?
Those brave activists, journalists, and everyday people (particularly across the Middle East) who are willing to fight for justice, dignity, and equity against much more powerful adversaries who seek to silence them.

What did you originally want to be when you grew up?
When I was a little kid, I wanted to work with gorillas. I could have easily gone that route as I started training as an anthropologist, but decided to stick to people.

What advice would you give your younger self or someone considering a similar path?
Know why your work matters, not just to you but to the people who matter to you. Don't follow a topic or issue just because you think it will get you a job or because it is "hot" at any given moment. Those things will and do change. Do work that you have stakes in—politically, ethically, spiritually, and personally. But at the same time, remember that no job will fulfill you in every way. All jobs can be hard at times. So, keep boundaries and protect yourself and your time. And collaborate and organize with others to ensure fairness and equity in the workplace.

What are you most proud of in your career to date?
I am most proud of doing all the things young, aspiring academics are expected to do (i.e., publish my work, teach, speak at conferences, etc.) while having two kids and staying true to my own political and ethical commitments in the process.