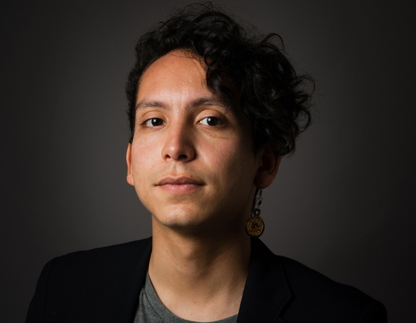 Milton Guillén is an award-winning Nicaraguan filmmaker who dwells in the realm of docufiction. His most recent works center on the cinematic intersections of de-colonial ethnographic research and the affective image. Milton's films have screened globally at CPH:DOX, Hot Docs, DOK Leipzig, Rooftop Films, and more. In 2017, his debut feature, The Maribor Uprisings, co-directed with Maple Raza, received the Society for Visual Anthropology's Best Feature Award. Milton recently received support from the Tribeca Film Institute and ITVS for his project, On the Move. He also was named a fellow at the Points North Institute, the Bay Area Video Coalition, Kartemquin Diverse Voices in Documentary, and is the recipient of several international artists' residencies and grants. Milton graduated in June 2020 from the School of Communication with a master of fine arts in documentary media and joined the Camden International Film Festival as a programmer for the 2020 edition.

How would you describe your research and/or work to a non-academic audience?
My research spans over a range of cinematic systems that borrow, engage, and dialogue with feminist visual anthropology and political cinema. This process usually involves dislocation of the binary of fiction and non-fiction and finds itself in a messy third space of hybrid films. Through this framework, I usually collaborate with different social scientists or artists to produce nuanced stories of migration, displacement, as well as the effects of the Anthropocene in the natural world.

Tell us what inspired your research and/or work.
Most of the work that I feel the most comfortable with, or less dissatisfied with, finds its inspiration retroactively. A great deal of inspiration came from the way social movements articulate discourses of collective anxiety for those who are facing climate debacles or the failure of the nation-state. It is in those spaces I find inspiration to expand my own political imagination, actively de-centralizing the focus of attention into the peripheries, and questioning the role of cinema in all of this.

What is a mistake you have learned from your career?
Until recently, my filmmaking life has been mostly supported by academia, which speaks volumes to the way structures of power control and produces art. In this process, I may have fallen into the trap of academic soliloquy, pursuing epistemological questions that distracted me from my own artistic needs. Thanks to several shock therapies from the real world, I managed to snap out of that loop and have been patient enough to explore new ideas that are deemed to fail. In other words, the biggest lesson has been to be flexible with the way stories take shape, rather than trying to fit them to a pre-articulated intellectual framework. Once you give the idea the life it deserves, you then go and make the movie you have, not the one you thought you had, even if that were to fail.

Whom do you admire in your field and otherwise, and why?
I have had the opportunity to interact and sometimes work, with many of the folks that I admire in the film industry. From my former professor, co-director, and friend, Maple Razsa, I learned a lot about discipline and rigor in the intellectual framework of a film. From my friend and mentor, Samara Chadwick, I learned a lot about the ways cinema leaves haptic traces of what, how, and why a movie was created and the possibilities to make space for social justice through and with audiences when programmed correctly. More recently, I have been fortunate that Northwestern has a wide range of amazing filmmakers and people such as JP Sniadecki, Calum Walter, Marco Williams, and Meredith Zielke that have pushed my ideas rigorously, actively shaken me out of the loop of comfort in storytelling. Thanks to them, I am happy to say that I admire my friends and colleagues that wish to make a difference in their field, either by teaching, making art, or simply being good human beings that truly care about each other.

What do you find both rewarding and challenging about your research and/or work?
As I write this interview, hundreds of millions of people are engaging in a major lockdown where social distancing reminds us of the uncertainty and fragility of individualism. In making films I think we can find alternative projects of solidarity and camaraderie that respond to our emotional and creative needs. I am repeatedly humbled and inspired by the dedication of my collaborators and the way they push me to unexpected places I would never have gone without their support. I think these creative families are the greatest gifts of filmmaking and they also serve as a model of teamwork that can be applied to future configurations of what we will need to do to continue as a species.

What is the biggest potential impact or implication of your work?
Filmmaking tends to hold itself in a self-congratulatory emotional podium, pretending that it can solve the world’s most vexing problems with emotion, or information. I think that is a blatant lie but we must see the lie with a caveat. Films are part of an intricate part of our society and we imagine ourselves through them. They bring us together to spaces that can become political via aesthetic, senses, and our own reflections in societies. Cinema as an entity or a system, upholds the status quo, even if it critiques it, but it can be more than that and I hope my work engages in these kinds of conversations and possibilities. I am interested in making films that defy our passive experience with the world and energize creative solutions to what and who we can be without being didactic.

Our office is open by appointment only. Please email tgs@northwestern.edu for assistance.