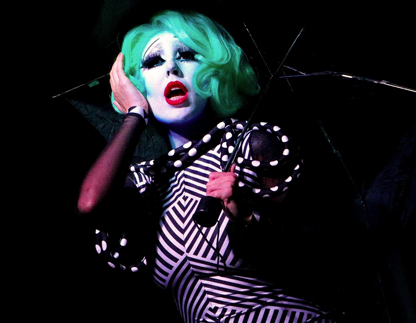 Lucky Stiff graduated in June 2019 from the School of Communication with a master of fine arts in directing. Their thesis, Becoming Lucky, explores the art of Drag through the intersections of nightclub culture, performance art, and theater. In addition to regular performances around Chicago, Lucky is cohost of The Tea, a weekly podcast cohosted by Chicago-based drag queen, T Rex.

How would you describe your research and/or work to a non-academic audience?
I build original experiences that often combine nightclub culture with performance art and theater. This work is queer-focused and has a broad inspiration base which encompasses Weimar Germany, Pierrot clowns, golden age musicals, and more.

What have been some of the most memorable twists and turns of your career?
It's a crazy spectrum which might start on a Friday night in a whiskey-soaked dive bar and end on Tuesday performing at a major regional theater or museum. I've performed an hour-long solo show for one person and a three-minute lip-sync for thousands of people on a giant outdoor festival stage. Sometimes the best moments are answering Instagram messages from listeners to the podcast I cohost (“The Tea”, cohosted by T Rex); I feel incredibly blessed to have such a variety of experiences and to be able to connect to so many different people on so many different platforms.

Tell us what inspired your research and/or work.
In between my second and third years at Northwestern’s master of fine arts program, I began to attend Drag shows in the city whenever possible, for reasons that I later realized were connected to questions of gender that were arising in my coursework and in my first year MFA show, 4:48 Psychosis. Through viewing these Drag performances, I realized that the most successful of them were intense distillations of story told through three-and-a-half-minute pop songs. These performances seemed to be about embracing and/or poking fun at the traits which made the performers seem “unsuitable” to a mainstream world, taking this pain and fear and translating them into entertainment. Over the course of the last five years, I became increasingly that the skills I learned at Northwestern and the spectacle-based, immersive theatrical style I sought to create were in fact what I needed to succeed in the queer performance practice of Drag. Through learning how to personally connect to my work without drowning in trauma, I allowed myself to take a hard look at who I was and acknowledge, for the first time in my entire life, that I was transgender. All of my work since then has been about investigating this through performance.

Whom do you admire in your field and otherwise, and why?
There are so many incredibly talented performance artists breaking ground every day that it's impossible to name them all. I often look to queer elders who have been doing art and activism in performance for decades, or to those we lost before their time in the AIDS crisis. As a queer community we have to lift up our elders - recently it came out that Ms. Joan Jett Blackk, the first drag queen to run for president, is in her mid-60’s and facing homelessness. So many trans artists struggle with financial and safety challenges, and it's our job to support them in recognition of the roads they've paved for us.

What do you find both rewarding and challenging about your research and/or work?
When I'm doing it right, my work requires intense personal vulnerability and sacrifice, and I can often feel like I'm not leaving anything for myself. I'm still learning how to create interactive and immersive performances that fill up both the performer and spectator.

What is the biggest potential impact or implication of your work?
I spent my time in graduate school examining what kind of theater or performance is worthwhile to me, which ultimately has everything to do with empathy, appeal, and theater's transformative power to affect personal change and growth. By affecting empathy in the viewer, person-by-person, I believe that performance can change the world on a massive scale. At its heart, everything I create is about queer survival—how to achieve that for myself, but also how to model hope for those who may not be able to access it for themselves.

Tell us about a current achievement or something you're working on that excites you.
I'm incredibly excited to be working on The Storefront Project, a site-specific collaboration between the Prop Thtr in Avondale and the Museum of Contemporary Art Chicago (MCA) based on queer and trans diaries from the Great Depression. The Storefront Project asks six Chicago-based directors to each choose a text–not written for theater–and devise a new project, tailor-made for MCA Chicago and Prop Thtr, a major downtown institution and an Avondale DIY theater venue. These shows will be performed the first two weekends in September, once at the MCA and once at the Prop. The goal is to highlight the innovations that are possible when directors experiment with making theater under shifting circumstances.