MFA Graduate in Writing for the Screen and Stage, School of Communication 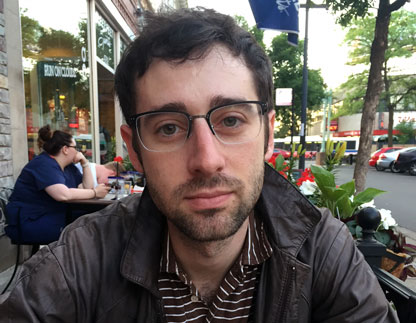 Lars Steier graduated in June 2018 from the School of Communication with a Master of Fine Arts in Writing for the Screen and Stage. With the support of a sitcom grant from the Department of Radio/Television/Film, Lars wrote and is producing a half-hour television pilot called "Cinerama" that draws from his experience of working in a movie theater in Oregon. In addition, he is currently directing an animated short film that takes place on a spaceship.

How would you describe your research and/or work?
I write and produce movies, primarily character-driven comedies that take place in a working-class setting. A lot of my writing incorporates long, awkward silences and a little bit of slapstick. My main focus this year has been making a half-hour television pilot called "Cinerama." I wrote the script in a course called Advanced Sitcom Writing, and it was selected for the Radio/Television/Film Department's sitcom grant in December. In the spring, I worked with a team of mostly undergrads to produce the pilot, and we're hoping to complete post-production by September. The pilot is about the day-to-day life of the crew of a run-down independent movie theater that's on the verge of closing. We shot it at an old theater in Cicero, IL and the whole experience has been very fun.

Tell us what inspired your research and/or work.
My pilot was inspired by a job I once had working in concessions at a movie theater in Oregon. My coworkers were all very weird and funny, so I was able to incorporate a lot of their behavior into the episode. More generally, I'm inspired by interesting people I've met, and by the small-scale events of daily working life.

Whom do you admire in your field and otherwise, and why?
I guess I most admire independent filmmakers like Jim Jarmusch and Kelly Reichardt, who make movies that have a distinct tone and feel like no one else could make them. I enjoy lots of Hollywood movies, too, but independent directors working with lower budgets feel the most exciting to me.

What do you find both rewarding and challenging about your research and/or work?
I don't have a background in film production at all, so it's been very rewarding this past year to see things I've written actually be filmed. The production aspect has also been challenging and reliant on a totally different skill set than writing, but I've enjoyed it.

Tell us about a current achievement or something you're working on that excites you.
I'm currently directing a short animated film that takes place on a spaceship. I'm working with a group of undergrads at Northwestern who are doing the actual animation. It's from a script I wrote a few years ago, so it's exciting to finally be able to produce it. I also did the voice for the main character, which was a great experience even though I'm probably not the most talented voice actor.

What have been some of the most memorable twists and turns of your career?
Before enrolling in the MFA program at Northwestern, I was a sports writer, most recently for a small newspaper in Washington State. I covered a lot of different high school and college sports, and some other interesting events like a demolition derby. I enjoyed my job, but I decided that I wanted to be doing more creative writing, so I quit and came out here. Also, I just completed my master's program, and that was memorable.