PhD Student in the Rhetoric and Public Culture Program, School of Communication 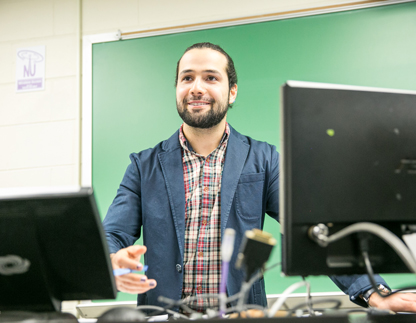 José Luis Quintero Ramirez’s interest in technology, music, and Latin American studies arose from his experiences growing up in Guatemala City, Guatemala and developed as he studied abroad in Italy and Germany in high school and college. Now a second-year PhD student in the Northwestern School of Communication’s Rhetoric and Public Culture program, José became increasingly attentive to how the international distribution of music on the internet--from Guatemalan ballads to indie pop rock--dynamically shape what it means to be a man in Latin America.

Before he came to Northwestern, José graduated from Lewis & Clark College in Portland, Oregon with a double major in rhetoric and media studies and German studies, with a minor in computer science. He was drawn to Northwestern’s Rhetoric and Public Culture program because of its interdisciplinary nature. José says the program takes up an interest in how discourse or communication is deployed in different cultural spaces, which intersects with many areas of study, enabling him to take courses in departments and programs ranging from Political Science to Gender & Sexuality Studies to Radio/Television/Film. While he has one more year of coursework before developing his dissertation prospectus, José’s research has evolved to focus on record stores, Latin America, and the intersection of network subjectivity and masculinity in the 21st century. He notes that his program’s interdisciplinary focus has been good for his social life as well as his research, since he has built friendships across Northwestern.

In his second year at Northwestern, a typical day for José starts with a three-hour seminar course. These discussion-based courses typically convene a small, interdisciplinary group of graduate students. Last term, José took a seminar titled “Sound(ing) Race, Gender and Class: Readings in Latinx Popular Music and Literature,” taught by Prof. Frances Aparicio, Director of Latina and Latino Studies at Northwestern. José also developed an independent study with a handful of students on network subjectivity, or the study of how network technologies, like the internet, change the way people experience the self and the community.

José also teaches an undergraduate public speaking course of his design, a PhD program requirement and stepping stone in his long-term goal to be a professor. The School of Communication course is required for students in communications and engineering but is open to all Northwestern undergraduates. While the main goal of this class is to alleviate anxiety for students new to public speaking, it also aims to teach students how construct and deliver a great speech. José draws from popular and powerful speeches to teach students how to make informative, storytelling, and persuasive speeches throughout the quarter. José’s favorite section is storytelling, and he draws on relevant videos from The Moth to show his students what great storytelling speeches can look like. Through these examples, he helps parse out the parts of a great speech and how those parts speak to one another.

Music plays as large a role in José’s downtime as it does in his research, and his evenings are often spent in song. An a cappella member as an undergraduate at Lewis and Clark College, José is now a passionate member of Keynotes, the graduate student a cappella group that rehearses once a week. He also has a band with a friend and likes to go to concerts in Chicago as often as his schedule allows. Beyond music, he spends time in Plant-It Purple, the graduate student community garden outside of the Tech building, to relax and socialize.