Associate Director for Outreach and Communications, Office of Fellowships 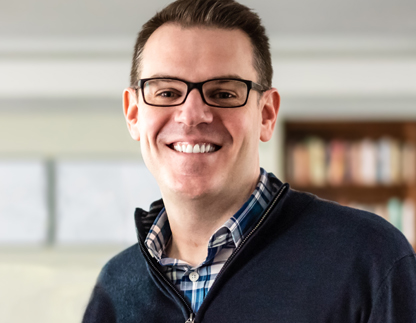 Jason Kelly Roberts is the associate director for outreach and communications in Northwestern’s Office of Fellowships. He received his PhD from the Screen Cultures program in the Department of Radio/Television/Film at Northwestern’s School of Communication. Jason also serves as the associate chair for the Humanities Residential College at Chapin Hall, where he is the founder and host of the Chapin Cinema Club. In 2017, Jason received the T. William Heyck Award for his contributions to Chapin.

My research considered how film critics responded to moments of major technological change, such as the coming of sound. In short, I wanted to know what film critics thought and felt when the technical foundations of the medium shifted. For my work at the Office of Fellowships, I help students and alums discover and articulate their interests and goals, from undergraduates seeking an opportunity to work in government to advanced PhD students applying for postdoctoral awards. Through brainstorming sessions, direct feedback on their writing, and mock interviews, I support Northwestern students as they pursue their dreams.

The biggest twist was getting this job in the first place. I became the graduate assistant in the Office of Fellowships as an after-the-last-minute replacement in 2012. I fell in love with the work immediately at a time when I wasn't sure what kind of career I would have. I knew I wasn't destined for a life as a tenure-track research professor and didn't know what type of work I was suited for, so I was thrilled to discover that my training and personality found a happy match in fellowships advising.

I will be forever grateful to the person who hired me, Dr. Sara Anson Vaux, the founder of Northwestern's Office of Fellowships. At a time of great uncertainty about my future and the value I offered the world, Dr. Vaux believed I could make a meaningful contribution to her team. I will always treasure that vote of confidence and the mentoring I received from her until she took her well-deserved retirement. She knew it was possible to be generous and demanding simultaneously, and I hope I model that spirit in all of my work with students and alums.

My biggest dream for my work is that I get to play a small role in someone else achieving something great, whether that's through receiving the opportunity I helped them pursue or by giving them the clarity and confidence to reach for their highest aspirations, regardless of the outcome for any given fellowship application.

The quarterback for the University of Michigan football team.

If I could go back to my college-age self, I would scream at that person to stop being so afraid of everything and seek out experiences. Although things have mostly worked out for me, I would also encourage anyone considering an advanced degree to first ask themselves what they want to do with their lives and then find out if an advanced degree is necessary to make that goal a reality. And lastly, I would recommend trying all of the Ben & Jerry's flavors.

My professional life's peak has probably been Chapin Cinema Club, which just completed its fifth year in June. I founded this club for the Chapin Residential College as a fellow and have seen it grow into something more meaningful than I could have imagined. Meeting new Chapinos and building community with them through the club has offered me some of the happiest moments of my Northwestern career.