PhD Candidate in the Interdisciplinary Theatre and Drama Program, School of Communication 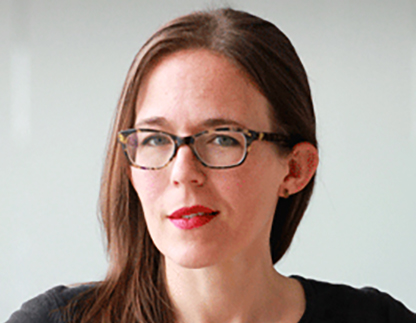 How do you create theatre that allows audiences to feel like meaningful participants? E. B. Hunter, PhD candidate in the Interdisciplinary Theatre and Drama program, answers this question by combining theatre with new immersive technologies like mixed reality and video games. In her work, audience interactivity—analog and digital—takes center stage.

Hunter’s passion for theatre developed when she moved to New York City, where she earned an MFA at Columbia University in dramaturgy. As Hunter explains, part of the job of a dramaturg is to “think about how a play functions as both literary and stage entity.” But making theatre in New York City is no easy feat. With limited resources, Hunter recalls, she learned to be scrappy, an ethos that laid the groundwork for her future experimental work.

After leaving New York, Hunter’s next stop was Birmingham, Alabama. In Birmingham, Hunter encountered Sloss Furnaces National Historic Landmark, a restored blast furnace with massive boilers and underground tunnels that is a relic of the town’s industrial past.

“The amount of sensory input on-site is overwhelming,” she explains. “Sloss is itself a kind of virtual reality. I was knocked out by the inherent theatricality of the space.” Inspired by the dramatic architecture, Hunter began staging Shakespeare’s plays throughout the site. According to Hunter, Sloss’ immersivity amplified elements of the play and invited the audience to become more interactive.

It was tracking this dynamic of audience interactivity that brought Hunter to Northwestern to pursue a PhD in theatre. In her work, she focuses on immersive scenarios where an audience’s participation is necessary but does not change the outcome of the overall story. Among the scenarios she analyzes is the world of video games, which Hunter sees as overlapping theatre in important ways. “Games are just a script until somebody starts up the machine,” she notes. “In that regard they’re similar to plays, which also come into being through production.”

As a practice-based extension of her dissertation, Hunter started Fabula(b), a theatre and interactive technology lab in residence at The Garage at Northwestern. At The Garage, she encountered the HoloLens, Microsoft’s mixed reality headset. Unlike a VR headset, the HoloLens overlays digital holograms onto the user’s world, which users can interact with in real time. Thanks to a grant from Northwestern’s Center for Interdisciplinary Research in the Arts and the resources at The Garage, Hunter’s team at Fabula(b) is currently building Bitter Wind, a HoloLens adaptation of the Greek tragedy Agamemnon.

“We are building the game from the perspective of Clytemnestra,” explains Hunter. “Building for the HoloLens means we can give audience members the sense of occupying Clytemnestra’s interior world. It’s a new way to access her rage and grief over the loss of her murdered daughter.”

Hunter will graduate this June, and she is focused on building bridges between technology and the arts and humanities: “New immersive tech will shape how people encounter culture from this moment forward. I think there is an exciting opportunity for humanists and artists to help shape the future of this medium.”