MFA Candidate in the Writing for the Screen and Stage program, School of Communication 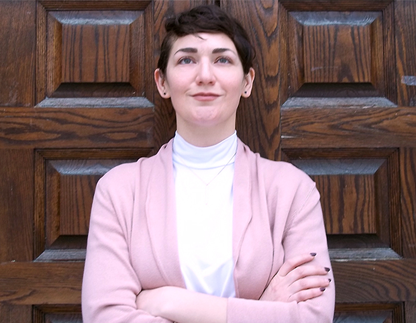 Dolores Díaz is an MFA candidate in the Writing for the Screen and Stage program at the School of Communication. She is a playwright and television writer. Dolores recently completed a television pilot, Border Grammar. In October 2018, Three Cat Productions (Chicago, IL) presented her full-length play, Man of the People. Also in October, MOJOAA Performing Arts (Raleigh, NC) and Nothing Without a Company (Chicago, IL) presented her short play, Appreciation Day. Dolores was a semi-finalist for the 2018/2019 Goodman Playwrights Unit.

Tell us what inspired your research and/or work.
I’m often inspired to use my plays in ways that interrogate current affairs. My recent full-length, Man of the People, explores the indelible character of the huckster, interrogating the U.S. love affair with charlatans. The play reflects the country’s current political climate as inspired through our past and examines society’s role in elevating those in power. My series, Border Grammar, showcases Latinx teachers as comical heroines correcting language in a place where English and Spanish are “mangled.” Los Tequileros, which will receive a public reading by 16th Street Theater in October 2019, provides historical context to the Brown Lives Matter movement and offers a local perspective on border security - an issue of renewed focus under the current administration. The play brings the U.S./Mexico border to the stage, humanizes people of the frontera, and reveals the deep-seated issues behind a border wall. My other work follows similar themes in terms of novel characters and topical happenings.

Whom do you admire in your field and otherwise, and why?
I am inspired by so many people: John Leguizamo, Martin McDonough, Maria Irene Fornés, Conor McPherson, Will Eno, Stephen Adly Guirgis, Annie Baker, Lorraine Hansberry, Suzan-Lori Parks, Edward Albee, Arthur Miller, Samuel Beckett, Luis Valdez, Yadira De La Riva, Tanya Saracho, Kirk Lynn, Rupert Reyes, and the entire team of Northwestern professors and lecturers mentoring me. These individuals are all fantastic writers and theater artists that have opened worlds and possibilities to me that blow my mind.

What do you find both rewarding and challenging about your research and/or work?
Theater and filmmaking are collaborative arts that rely on so many people to execute a vision. Reliance on the team makes the work both challenging and rewarding. I also find live theater particularly exciting – the audience makeup shifts nightly, actor deliveries change, and the context within which shows are presented is also different based on current events, so moments can resonate differently from show to show. This mercurial nature of theater makes it particularly challenging and the connection especially rewarding.

What did you originally want to be when you grew up?
A librarian, like my Mama.

Tell us about a current achievement or something you're working on that excites you.
I'm currently working on a full-length play that takes place over two timelines in Salem, Massachusetts. I’m interested in the question, “Can an entire American profession – policing – be haunted? Cursed? Is there an "original sin" that can be traced to Salem?”

Tell us about a time when things did not go as you planned, what did you learn?
This happens all the time in theater. I used to produce the Austin Latinx New Play Festival with Teatro Vivo (TV), which was a whirlwind turnaround with four different full-length pieces. Joann and Rupert Reyes (Founding Executive and Artistic Directors of TV) were an eternal source of light and support for me; from them I learned to be thankful for the things that go right. From the experience I learned to expect to problem solve at a moment’s notice and have faith in myself and that I can find a solution.