PhD Candidate in the Department of History 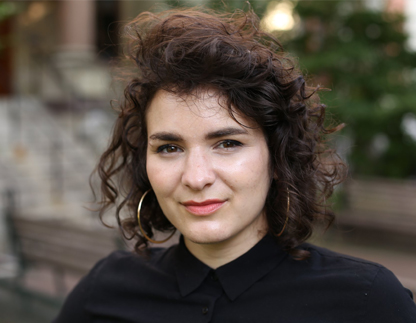 Charlotte Rosen is a PhD candidate in the Department of History in the Weinberg College of Arts and Sciences. She volunteers with the Northwestern Prison Education Program (NPEP) and is a team member of Study and Struggle, an ongoing project to organize against incarceration and criminalization in Mississippi through four months of political education and community building, convening study groups inside and outside prisons. Charlotte is a Presidential Fellow, the most prestigious fellowship awarded to graduate students by Northwestern.

The United States has the highest prison and jail population globally, holding 21% of the world's prisoners as of 2015 despite representing only 4.4% of the world’s population. Popular portrayals of the nation’s racialized carceral system often focus on the history of sensational federal anticrime initiatives like the Reagan administration’s War on Drugs, which suggests a seamless, federally directed ascent of mass imprisonment. Yet, the United States’ decentralized political structure means that most imprisoned people are arrested, prosecuted, and incarcerated by local and state authorities. Focusing solely on presidential rhetoric or federal policymaking obscures the actual history and political mechanics of how the U.S. became a prison nation.

Using Pennsylvania as a case study, I argue that when we turn our attention to the states, the rise of mass incarceration appears far from inevitable. In fact, tough-on-crime policies created a massive crisis of prison overcrowding in state prisons and local jails that threatened to severely limit or even upend the scope of the carceral state, even as law and order politics reached their political zenith. This crisis of prison overcrowding and extremely strained conditions was no joke. Between 1965 and 1995, a total of 41 states, plus the District of Columbia, Puerto Rico, and the Virgin Islands, at one point had prisons subjected to court orders because of unconstitutional prison conditions, and a staggering ten states had entire state penal systems under federal judicial control.

This history of state prison overcrowding suggests that, for our contemporary crisis of racialized mass incarceration to develop, this problem of overcrowding had to be solved by the state and local jurisdictions responsible for imprisoning the majority of prisoners in the nation—a process that was quite heavily contested by imprisoned people and their allies, and that was not inevitable even with the popular ascent of tough-on-crime rhetoric and political culture. In braiding the histories of state policymakers’ struggle to build sufficient carceral capacity with the history of primarily Black-led prisoner resistance, my dissertation demonstrates that the U.S. prison nation did not develop automatically or smoothly once the bipartisan “common sense” of tough-on-crime and carceral solutions became hegemonic. Instead, I show that the rush to punish and imprison with impunity created a crisis of state incapacity that initially placed meaningful limits on the political project of law and order.

Attending to this history of limits—encapsulated in the crisis of state prison overcrowding—matters because it helps destabilize still strong but increasingly fragile claims that the unfettered growth of prisons and imprisoned populations is a necessary or natural development in response to apparently rising crime. In helping to recall a moment when the problem and politics of prison overcrowding rendered the nation's carceral future more uncertain and fragile, I hope that my work can serve as an inspiration and offer strategic guidance for contemporary movements to abolish prisons today.

My work is inspired by the calls of imprisoned radicals and abolitionist organizers and scholars—figures such as Stephen Wilson, Russell Maroon Shoatz, Robert Saleem Holbrook, Angela Davis, Ruth Wilson Gilmore, Robin D.G. Kelley, Sarah Haley, Mariame Kaba, Harsha Walia, Dan Berger, Dean Spade and many, many others—who argue that prisons and police do not keep us safe and only intensify and uphold racialized, gendered, sexual, and imperial violence. I am also really compelled by the work of social scientists—such as Heather Schoenfeld, Mona Lynch, and Lisa Miller—who point out that dismantling the carceral system is going to require a precise reckoning with how the U.S. criminalizes, prosecutes, and punishes, which, due to the U.S.'s decentralized political structure, is a very diffuse and localized process.

In other words, racialized carceral power is deployed not at the federal level (although federal priorities, initiatives, and rhetoric matters), but by state lawmakers, local police, district attorneys, and correctional administrators' decision-making and discretion to punish and incapacitate. Historically, as my project shows, the state's desire to punish with impunity creates problems for state and local jurisdictions responsible for imprisoning increasing numbers of criminalized people. This problem of carceral incapacity—at the very moment when tough-on-crime, law and order politics are becoming hegemonic—both created openings for imprisoned people to challenge the nascent carceral regime and required state policymakers to attempt to manage this spiraling crisis, which was increasingly difficult to do in states experiencing fiscal crises and having to appease highly anti-tax voter base.

So, I'm fascinated by the history of these quite complex and localized political mechanics that made the rise of racialized mass incarceration possible because it's not enough to point towards Reagan or Nixon's racist anti-crime rhetoric to explain the explosion in U.S. prison populations in this late-twentieth century period. Rhetoric does not immediately translate into state capacity—and that's the puzzle my project seeks to unpack.

The biggest challenge I have is explaining why what happened in Pennsylvania matters to a broader conversation about how we understand the development of prisons and policing in the U.S. I believe it does, but it's easy to get lost in the weeds of local politics without properly articulating what these histories reveal for broader theorizing and organizing around the history of the carceral state and for the movements seeking to dismantle or defund it. Another major challenge is that so many of the experiences and perspectives of people imprisoned in Pennsylvania prisons and jails are not captured by traditional archival collections. Thankfully, some critical collections do exist, such as the archives of the Prisoner Rights Council at Temple's Urban Archives. However, it is still a challenge, not because I personally feel that I need "proof" of how violent, repressive, and white supremacist prisons were and are, but because sometimes the discipline demands it, even though the very erasure of these histories and archives is itself evidence of how the state seeks to obscure and bury evidence of its carceral and violent operation.

Pushing back against the presumption that the "state" (or more specifically, correctional administrators, district attorneys, or police) has inherently "good intentions," that the state's sources are always worthy of the historians' trust, or that the perceived absence of "legitimate" archival sources from criminalized people suggests we cannot make arguments about racialized state violence, is perhaps both a challenge and also a rewarding endeavor. If I can successfully disrupt some of these normative tendencies in the discipline, then historical work on the carceral state and US political history more broadly will be more analytically and politically precise.

Here I am especially influenced by the pathbreaking scholarship (but still, in some arenas, undervalued by US historians) of Saidiya Hartman, Michel Rolph-Trouillot, Marisa Fuentes, and others, who have highlighted the ways that the construction of and encounters with the archive are always political acts embedded in anti-Black and imperialist power structures.

I have been getting really into cake baking and decorating! My ideal unwinding scenario involves making a bunch of buttercream and doing an elaborate design on a cake and giving it to a friend. I also love to watch reality TV. A big favorite of mine right now is The Real Housewives of New York. I also like to rollerblade along the lake.

How Capitalism Underdeveloped Black America by Manning Marable and Postwar by Tony Judt.

Reject competition and the notion that academic knowledge requires particular forms of "expertise." Write your dissertation for no one else but yourself, your community, and for academic communities that align with your politics. Embrace collaboration. Write for public and non-academic outlets if you feel inspired to do so. Get involved in radical political movements and efforts to unionize. Understand yourself as an academic worker who deserves weekends and evenings off. Finally, never let anyone tell you that anything in academia is more important than your own, your family's, and your community's health and well-being.