PhD Student in the Department of History 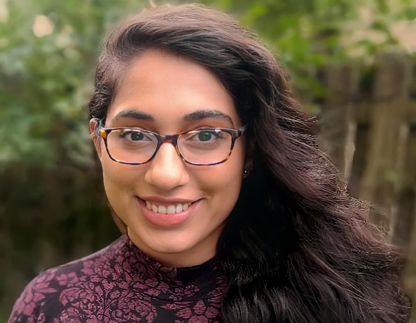 Anisha Bhat is a PhD student in the Department of History in the Weinberg College of Arts and Sciences. Her research interests include the social and political histories of people of African descent in the Indian Ocean world, and the implications of race, gender, and slavery in early modern South Asia. Anisha received a BA in history from Pomona College and an MPhil in world history from the University of Cambridge, where she was a Gates Cambridge Scholar.

My research considers how people of African descent in the Deccan region of India c. 1500-1800, known as Siddis and Habshis, participated in and shaped some of the important political transitions during that period, including the rise of the Maratha state. Centering the social and political networks and self-representations of Siddis and Habshis reveals previously obscured racial and gendered dynamics within a regional political culture that informed the development and rise of new states. Ultimately, I hope to complicate understandings of how slavery and diaspora influenced state formation in early modern South Asia. People of African descent contributed to South Asian political history in rich, complex, and enduring ways, which I hope to capture through my work.

A few years ago, I visited the city of Aurangabad. It was founded in the early 17th century by Malik Ambar, a former military slave of Ethiopian descent. He went on to become the de-facto ruler of a kingdom in the region. I wanted to visit sites and monuments attributed to him in the historical record. After asking around quite a bit, I was finally able to locate the Neher-e-Ambari, an aqueduct system he built. There, I saw a series of weathered but sturdy-looking stone cisterns passing through a populated neighborhood. A woman was drawing crystal clear water from one of the cisterns. Others had inserted pipes into the cisterns to transfer water into their homes. For most people there, this was a mundane sight—just another part of the city’s infrastructure. But for me, it was fascinating to see the traces of a very different past—where Africans like Ambar played a crucial role—integrated seamlessly into a modern urban landscape.

As an undergraduate, my coursework on the history of the early modern Indian Ocean world radically challenged my narrow conceptions of what it meant to have ‘Indian’ heritage as an Indian-American woman. I dove head-first into that complexity and I have been learning how to swim ever since.

Learning languages—specifically, Mughal Persian and Urdu—has been one of the most exhilarating, humbling, and challenging aspects of my training to be a historian. You have to be willing to feel like a kindergartener again. Still, the emotional payoff when you finally unlock the meaning behind a text or discover you have a sense of humor in another language is so great! Learning languages has also been a way to build friendships with other PhD researchers in my field. Let’s face it—there are not many people in the world who spend years of their life learning to read 17th-century Indo-Persian texts. It’s natural to feel connected with others who share such a unique experience with you.

I believe that the fraught histories of cross-cultural relation, slavery, and diaspora in early modern India and the Indian Ocean world open up new possibilities for understanding junctures between identity, politics, and heritage. These possibilities resonate with public conversations happening in South Asia and across the world right now. My work challenges the terms of debates over slavery and diaspora that have marginalized the contributions of Africans to South Asian politics and society. Additionally, the history of the Maratha state is a politically charged topic that is frequently co-opted for nationalist goals. My work unsettles these nationalist narratives by showing how a long history of interaction between African Muslims and Marathas in the Deccan shaped key aspects of Maratha state formation.

Don’t be afraid to branch out and cultivate all aspects of your intellectual and professional curiosity, even if they don’t seem immediately relevant to the task at hand. It took me a while to realize that being in a PhD program is not exactly the same as being a student. That is indeed part of it, but it is so much more than that. Get involved on and off campus. Think about the work that you want your scholarship and training to accomplish in the world.

Tell us about a current achievement or something you’re working on that excites you.

I worked with the nonprofit humanities council Illinois Humanities last summer as a Chabraja Fellow. I was part of a team implementing four rounds of emergency relief grants to small humanities organizations across the state struggling due to the pandemic. Growing up in Chicago, free humanities programming offered by local organizations profoundly shaped who I am today. So, that experience meant a lot to me.