PhD Candidate in Theatre and Drama 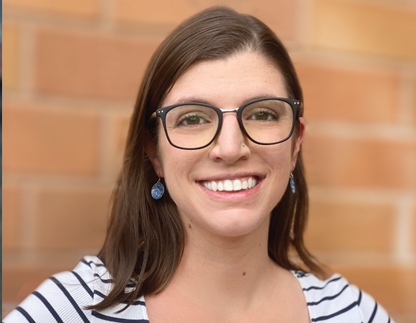 Alícia Hernàndez Grande is a PhD candidate in the Interdisciplinary PhD in Theatre and Drama (IPTD) program in the School of Communication. Her primary research interest considers how contemporary Spanish and Catalan protestors draw inspiration from artists during the time of Francisco Franco’s fascist dictatorship in Spain. Over the last two years, Alícia has served as a graduate assistant and graduate writing fellow at the Graduate Writing Place. As a young mother, she has also been a leader on campus in advocating for the University to provide equitable services to graduate students with children as they advance through candidacy to complete their degrees.

How would you describe your research and/or work to a non-academic audience?
I look at how artists used theatre to subvert, protest, and resist the fascist dictatorship of Francisco Franco in Spain (1939-1975). I then look at how these same protests strategies are being used in contemporary politics to protest austerity measures and, in the Catalan region, demand independence. Basically, how are contemporary Spanish and Catalan protesters using their parents' and grandparents' stories of resistance?

What have been some of the most memorable twists and turns of your career?
I welcomed my daughter in 2018 and suddenly passing on my Catalan identity, language, culture, and traditions became increasingly important. I started this project from a general perspective and curiosity. I am now studying how groups of people pass on often informal traditions and family memories while I try to do the same while raising my daughter in a foreign country.

Tell us what inspired your research and/or work.
My family's history is a huge part of what made me start on this project. My grandfather fought in the Spanish Civil War and survived labor camps afterwards. My parents lived through a dictatorship until their mid-twenties. As I was gathering case studies, I would call home to ask about a specific protest or event only to learn that my parents participated in them!

What do you find both rewarding and challenging about your research and/or work?
Spain, and especially Barcelona, is known internationally as tourist destination and it can be hard to explain the dark history of this country–and how recent it is! However, doing this work often means recovering voices and memories that are often forgotten, either because the tourist industry doesn't want to talk about it or because of the social taboo in Spain over speaking about the past.

What is the biggest potential impact or implication of your work?
The Spanish transition from dictatorship to democracy is considered a political success and was exported to many other countries, particularly in South America. Like Spain, those countries are now experiencing a high level of social unrest and protest, where contemporary issues are now intertwined with long-term resentment. With this work, I hope we can think about political recovery after dictatorship as more than simply politics or economics, but a social issue.

How do you unwind after a long day?
After difficult days, I always end up joining my husband to do my daughter's bedtime routine, playing with stuffed animals, enjoying some cuddles, reading books, and not worrying about cleaning up the kitchen quite just yet. My husband has developed this crazy puppet theatre using her stuffed animals and she knows all the parts by heart. Mid-pandemic, this stress-free family time has become even more crucial as we engage in pure silliness for a few minutes.

What books are on your bedside table?
La chica de la Leica by Helena Janeczek, a narrative on the photojournalism of Gerda Taro during the Spanish Civil War, whose work is often misattributed to Robert Capa. Also, The Memory Police by Yoko Ogawa.

What advice would you give your younger self or someone considering a similar path?
I would tell my younger self to not shy away from my history or culture. It has grounded me through the hard times and the doubts.

Tell us about a current achievement or something you're working on that excites you.
I recently published about the installation of Stolpersteine–or memory stones–in Spain. Stolpersteine commemorates victims of Nazi violence, and the presence of Spanish citizens in Nazi concentration camps has very much been forgotten in contemporary history. Publishing about how Spain, specifically approaching and engaging with Holocaust memory, has put me in touch with amazing other researchers, historians, and survivors. It has also helped me learn about my own great-uncle who survived Mauthausen-Gusen and will have a Stolpersteine installed in his memory soon.